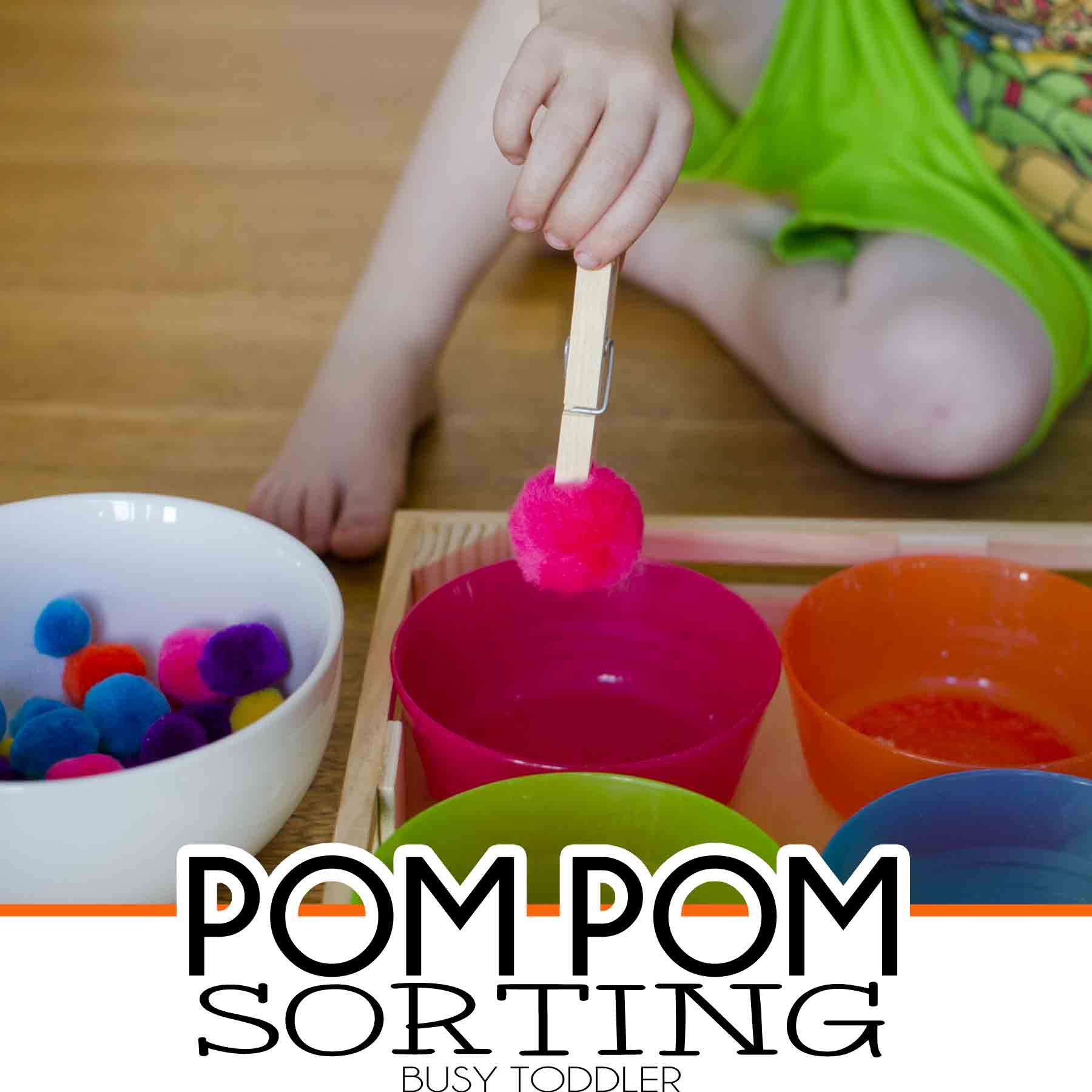 A fine motor skills activity with a math twist: you gotta try this pom pom sorting!

Pom pom balls are such a versatile toddler activity supply. We would be lost without our beloved bag of pom poms. Seriously, pom poms come out almost weekly around here and they still haven’t gotten old. In this activity, toddlers practice two important life skills!

This simple activity is actually a lot of bang for your buck: it’s fine motor skills AND math all rolled into one. Fine motor skills are important for future tasks like pencil grip and buttoning sweaters; sorting is a hugely important math skill that introduces the concept of classifying and organizing data (all that from a simple sorting game? You betcha!). 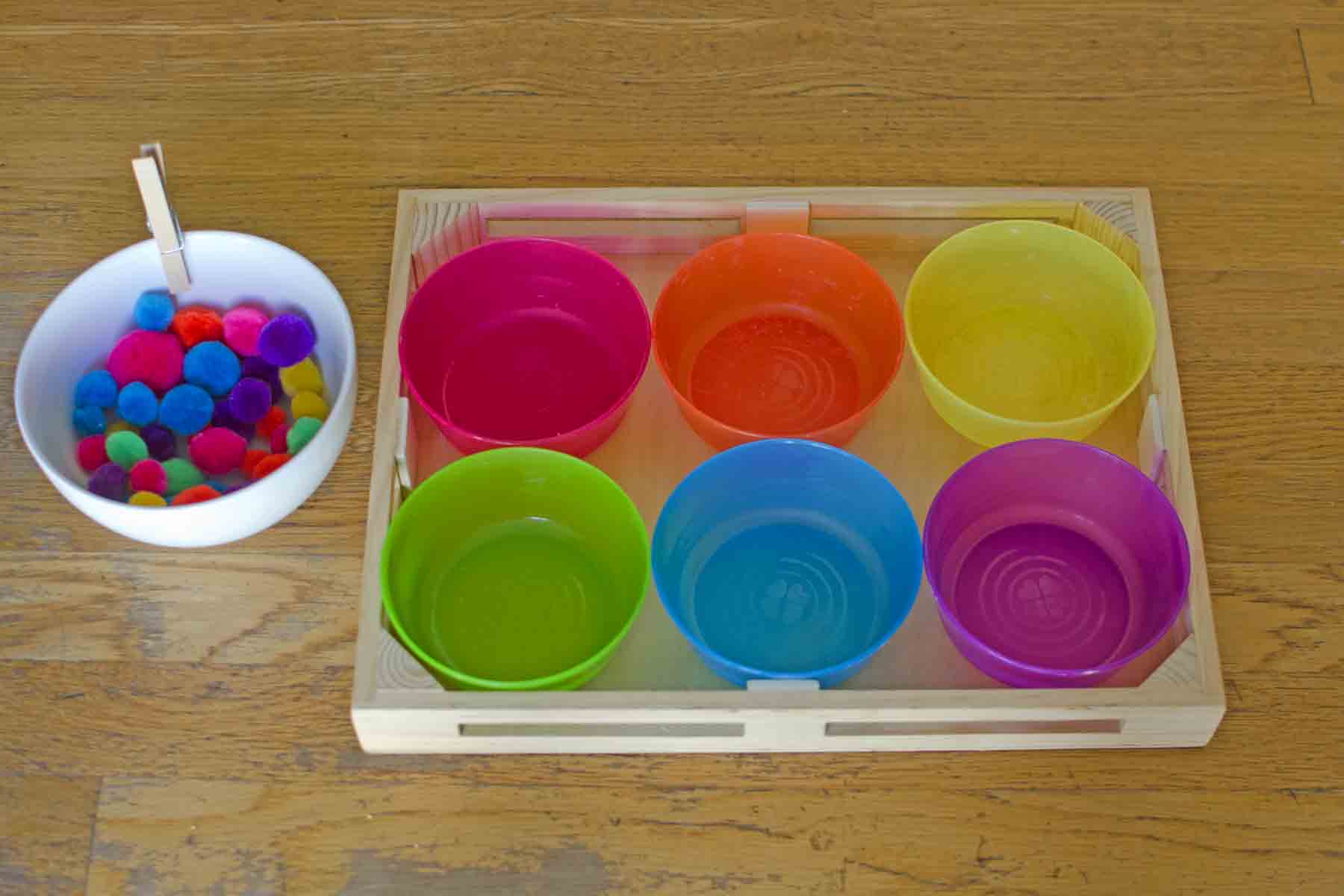 It doesn’t take much to set up pom pom sorting.

Boy, this was an easy one to set up! I grabbed my favorite colored bowls as our “what to sort into” base for this activity. I poured some pom poms into a bowl and added a single clothes pin. I did make sure that I only poured in pom pom balls that I had a colored bowls for (sorry white and red, you don’t get to play today). My son took one look at the set up and knew exactly what needed to be done. 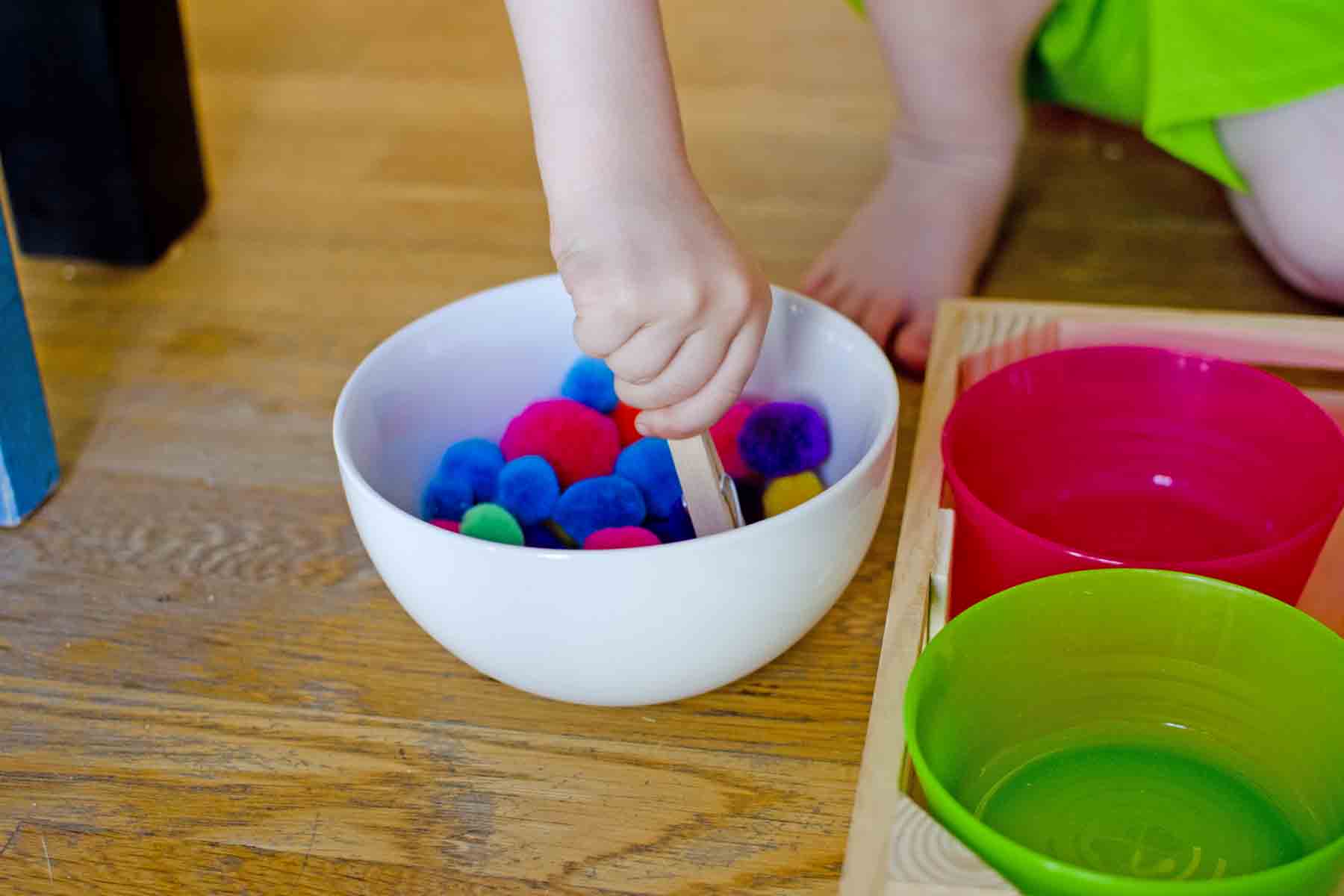 The coolest part about this sorting activity was using the clothes pins to capture the pom pom balls and transfer them over. What a challenge and work out for my toddler son! This really exercised his hand muscles and he was working hard. Pinching the clothes pins to open them, capturing a pom pom and moving it to the bowl was a lot of work for a tot. But a good amount of work. Not too easy, but certainly not too hard. This was right in his “wheel house”. 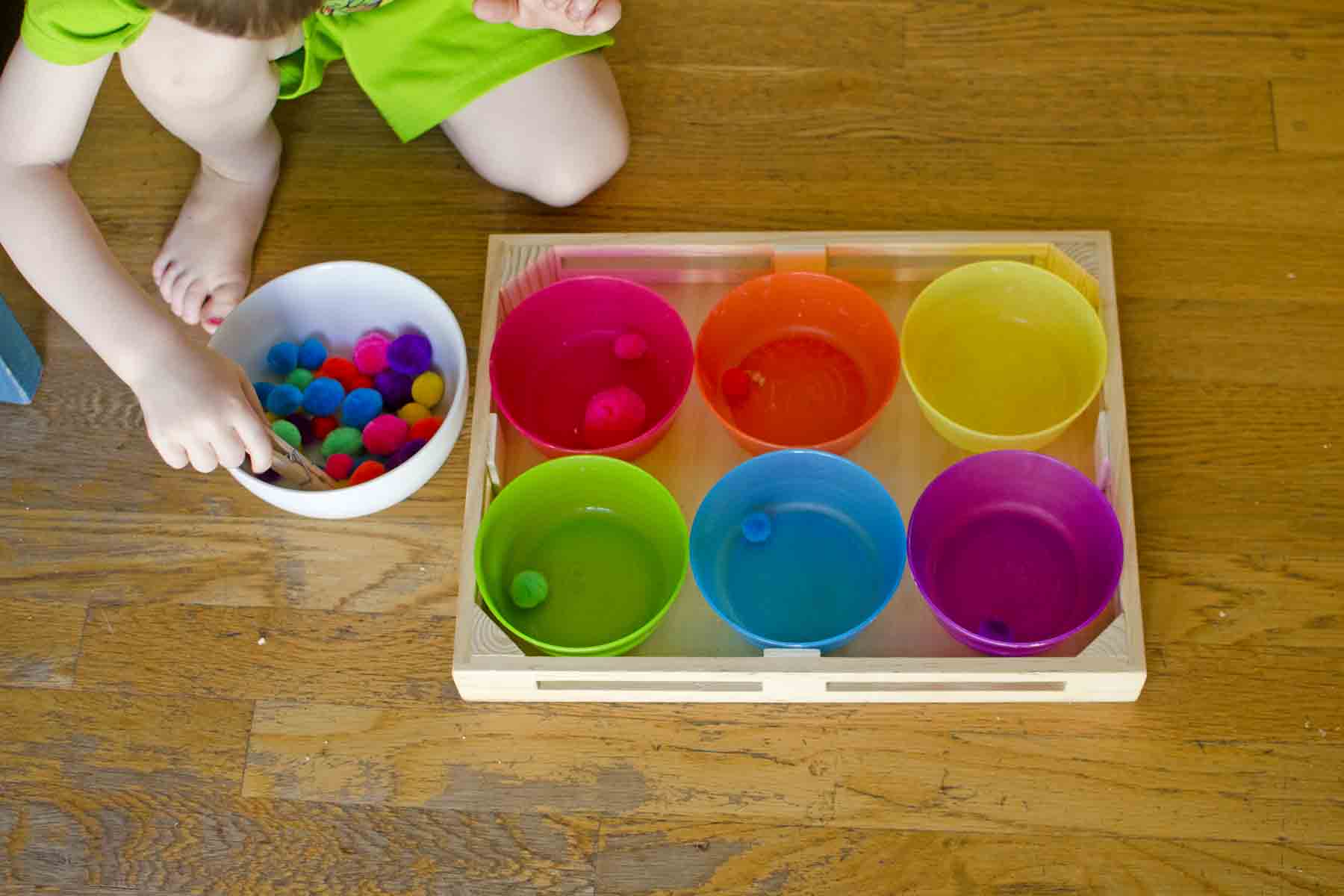 If you have a toddler who isn’t quite ready for clothes pins yet, consider small tongs or a pair of tweezers. My son used tongs with pom poms for almost a full year before he was able to master opening clothes pins. It takes time and there’s no rush! They all get it at their own pace. 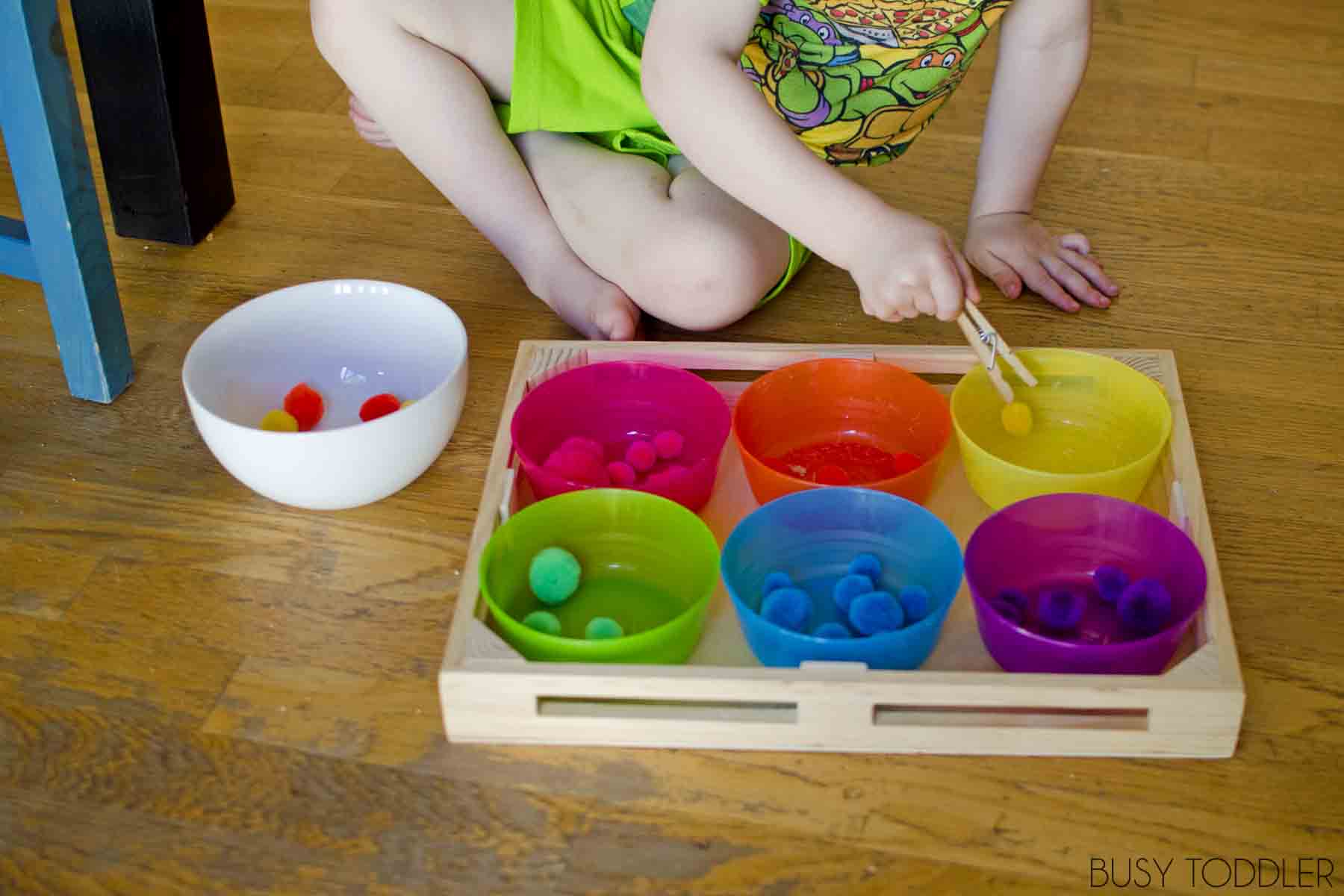 In the end, pom pom sorting took my toddler 16 minutes to complete. SIXTEEN minutes of hard at work, concentrating toddler while I made the grocery list and cleaned the kitchen. It was amazing – for both of us! He had so much fun doing this and worked his tail off to move all those pom poms. I was so proud of him. Pom pom sorting was a massive hit!

Will you try pom pom sorting? 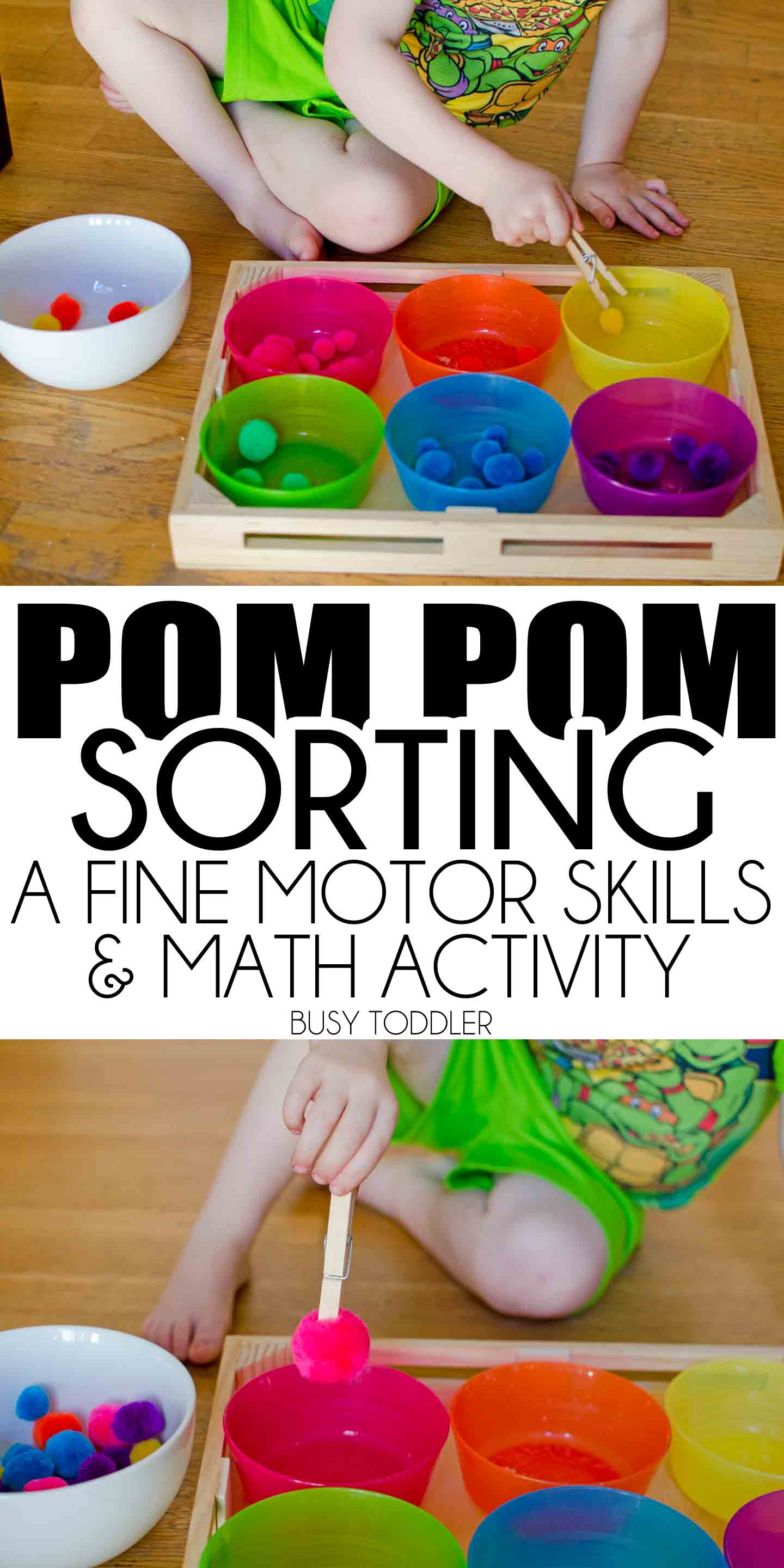