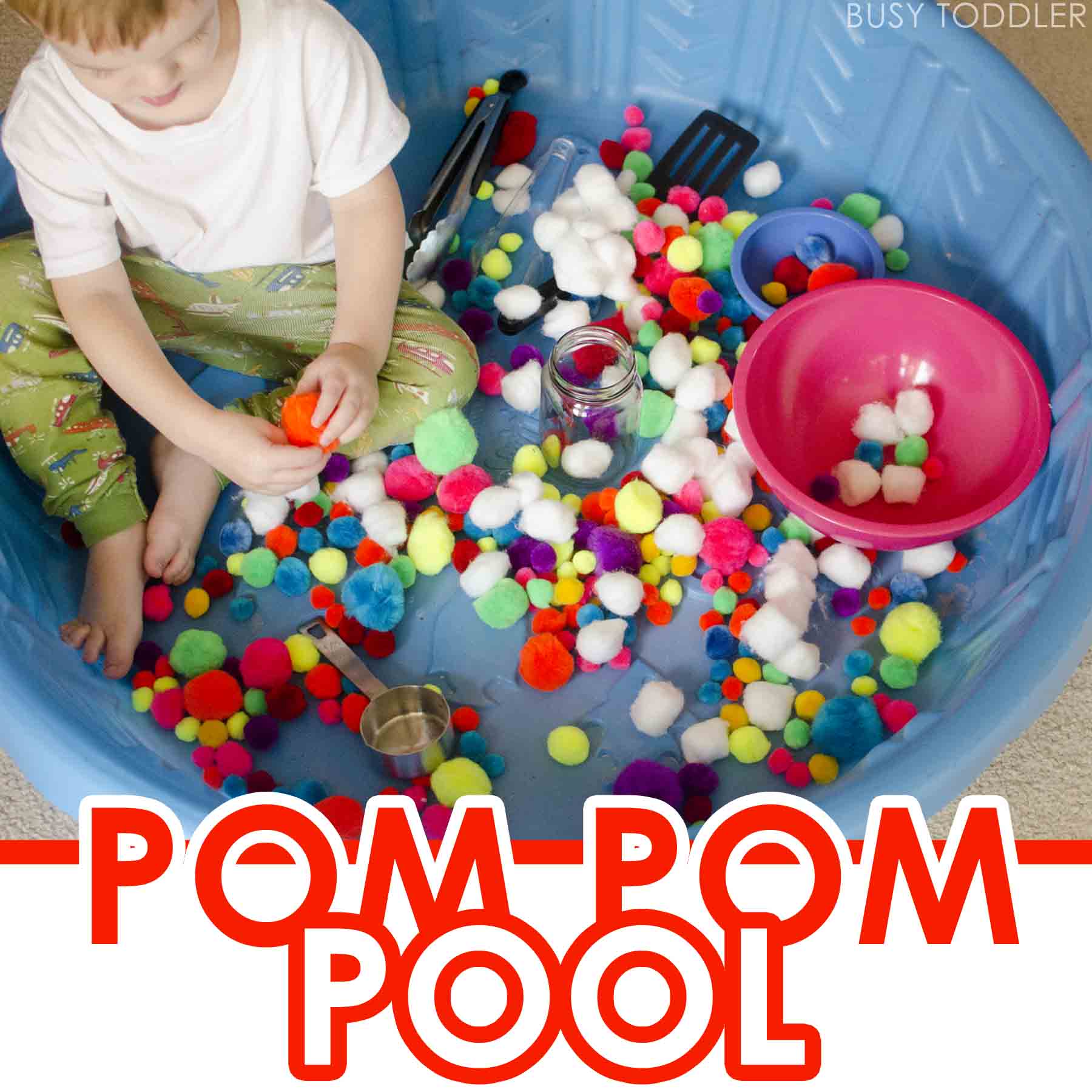 Have some cuddly fun with a pom pom pool.

Sometimes I look at the activities I set up for my son and think “Where is the adult sized version of this?”. Case and point: Pom Pom Pool. I would like to swim in a vat of pom pom balls ala Scrooge McDuck something fierce. But alas, this is for the kids. And this pom pom pool is a perfect one for them.

Kiddie pools aren’t just for the summer! I use mine year round for all sorts of fun indoor activities, like bean pool, indoor pool, and fluffy bin. 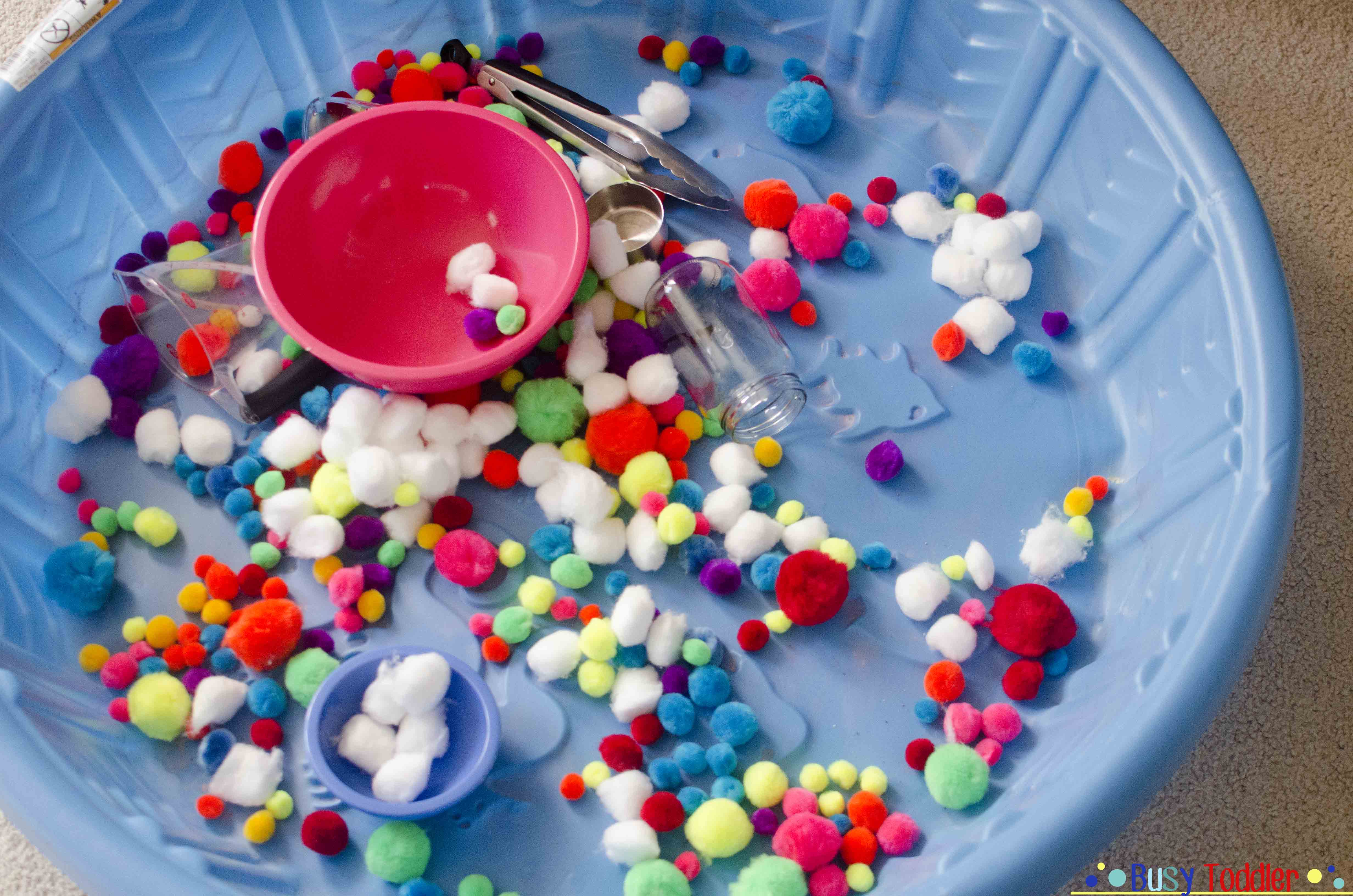 It was a rainy day and my son and I were stuck inside with a sick baby. Not to worry, trusty kiddie pool is always down for inside play on days like that. Before he woke up in the morning, I loaded our kiddie pool full of pom poms (that is just one bag of them!) AND a few bags of cotton balls because why not? Remember the part about being stuck in the house all day? We were gonna need all the support we could get. 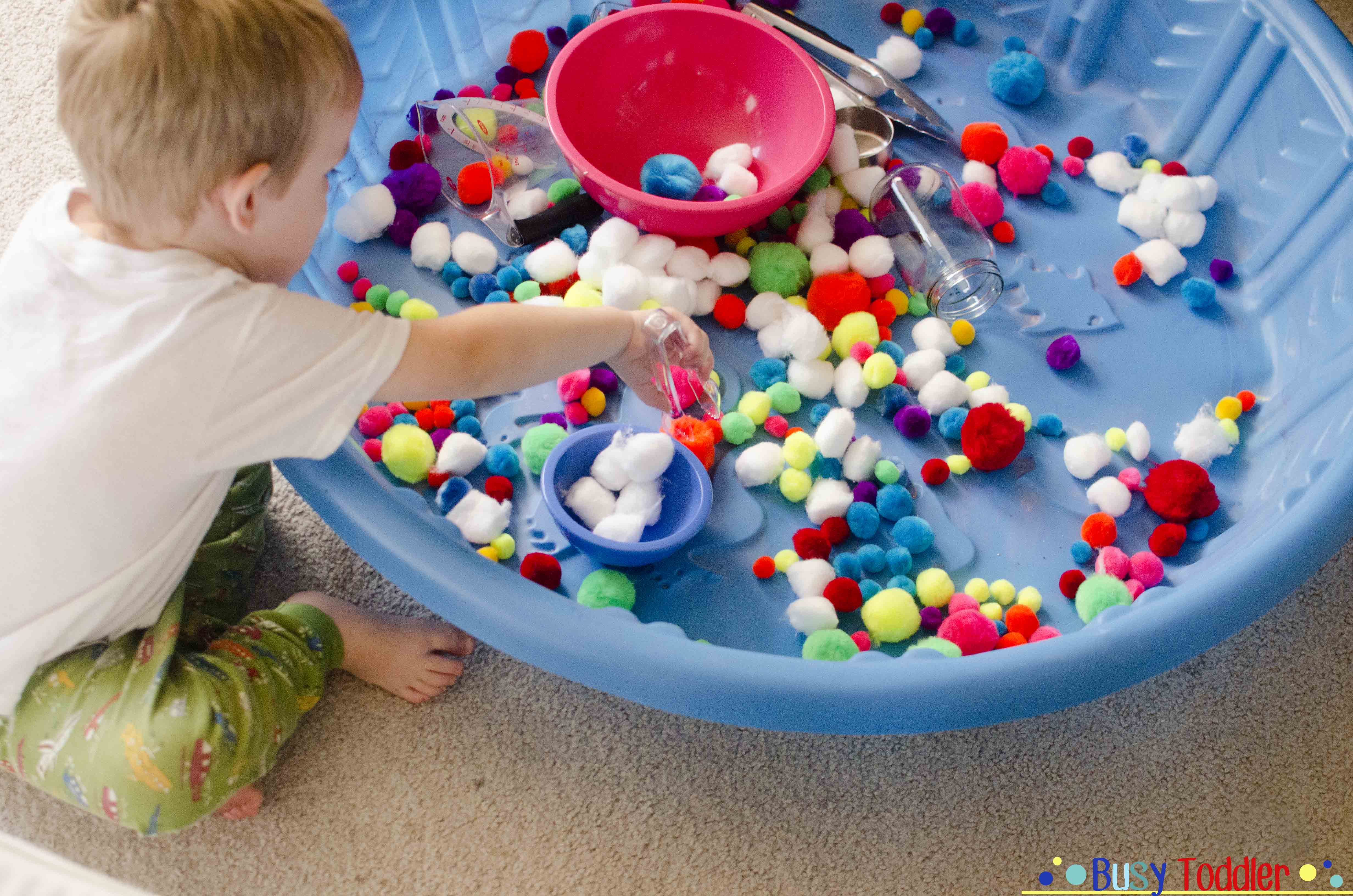 My son was so stoked when he saw this in the family room. Along with the pom poms, I’d added a few random kitchen utensils and some bowls because that just felt like the right thing to do.

And it was. He scooped pom poms, threw them in the bowl, grabbed them with tongs – all sorts of pom pom fun. He played with this for about 15 minutes before moving on to other toys but guess who kept coming back all the way until nap time? This bin of fluff kept calling him back in. 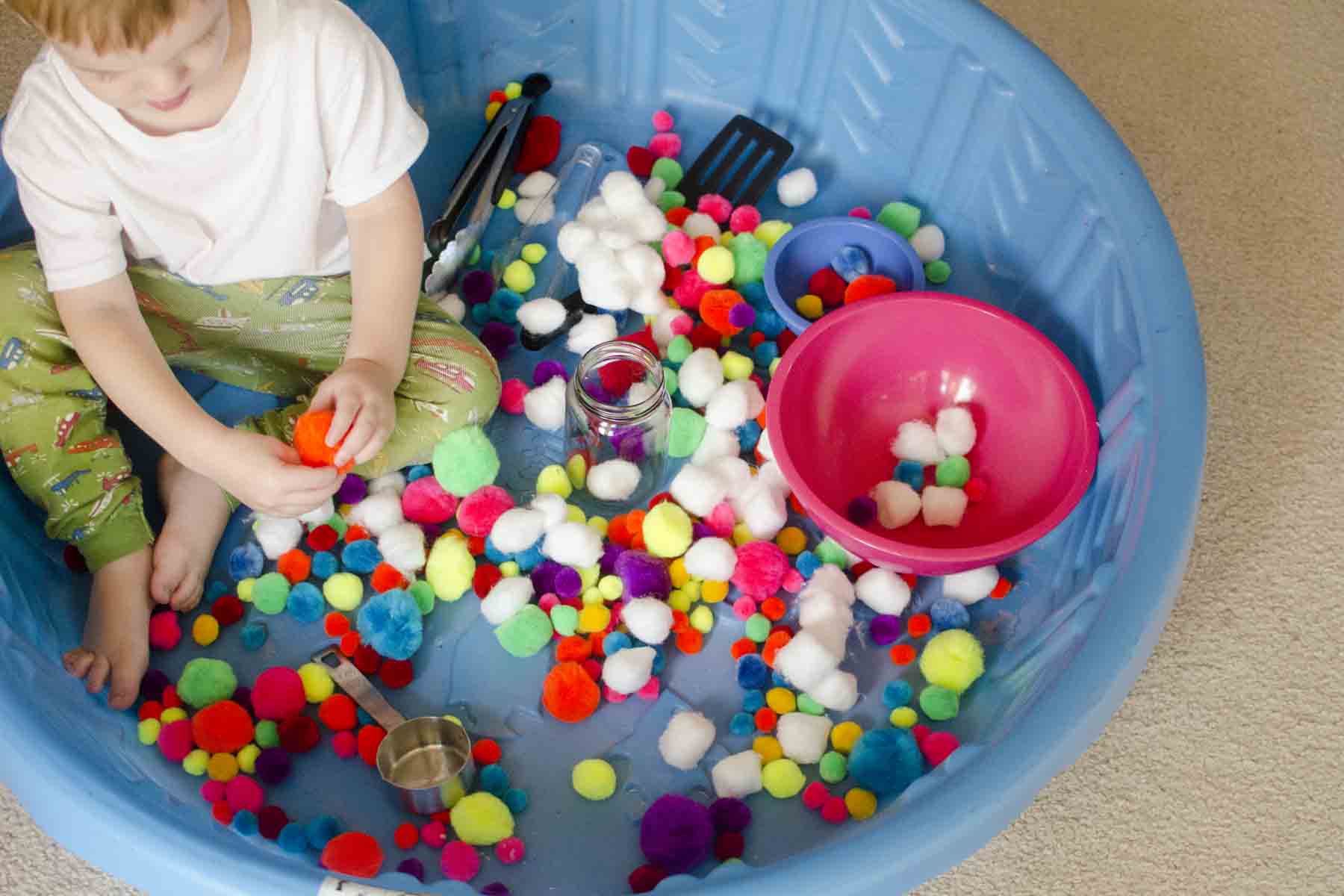 I’ve found so many times that I can’t be in a rush to clean something up just because he stopped playing with it. That might just be his intermission and it definitely was here. He had several subsequent rounds of pom pom play ahead of him and I’m so glad I didn’t pack it all up immediately.

This was a perfect mess-free sensory bin. Our pom pom pool was a huge hit and something I’m sure we will do again and again.

What would your toddler think of a pom pom pool? 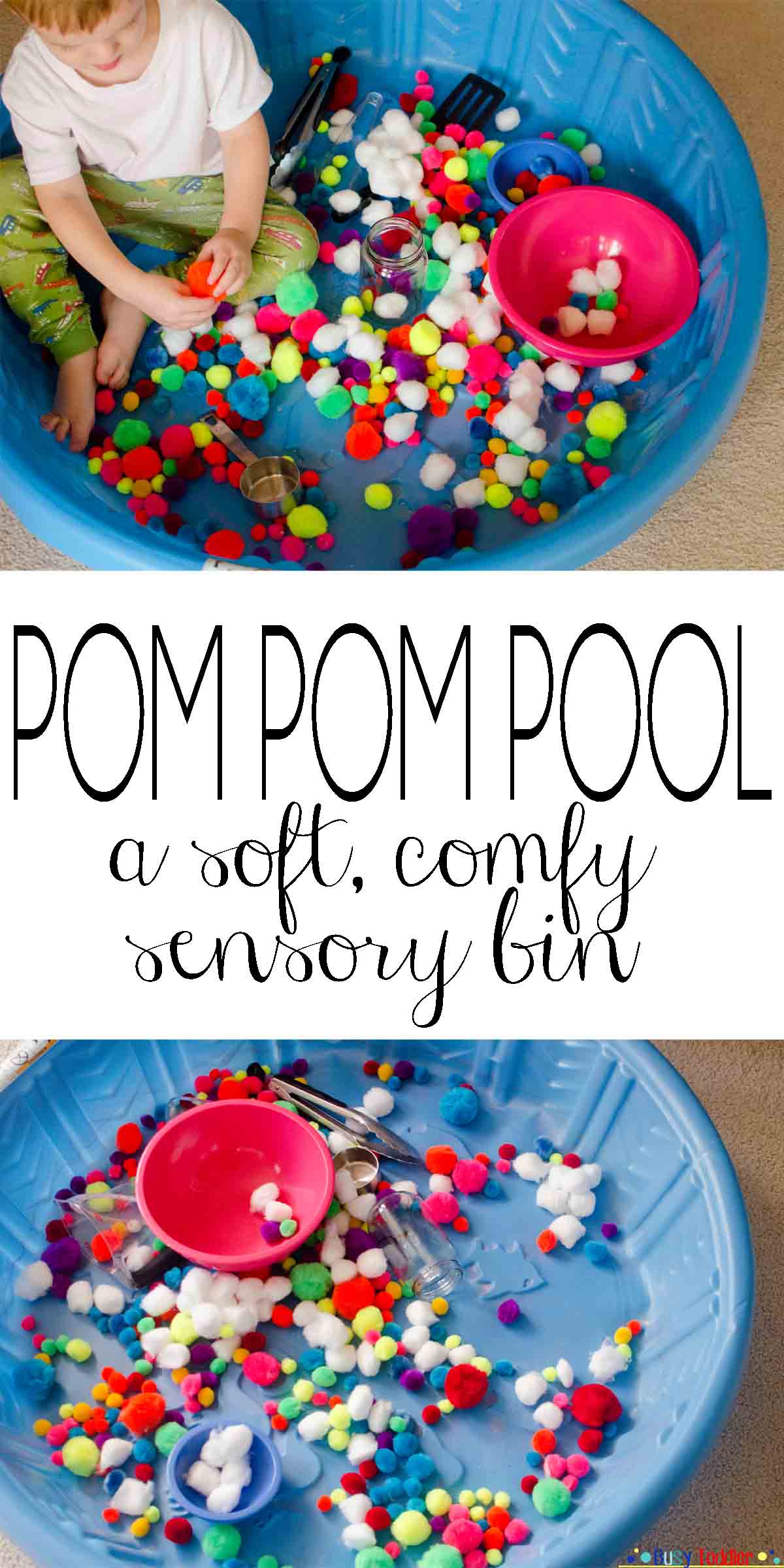