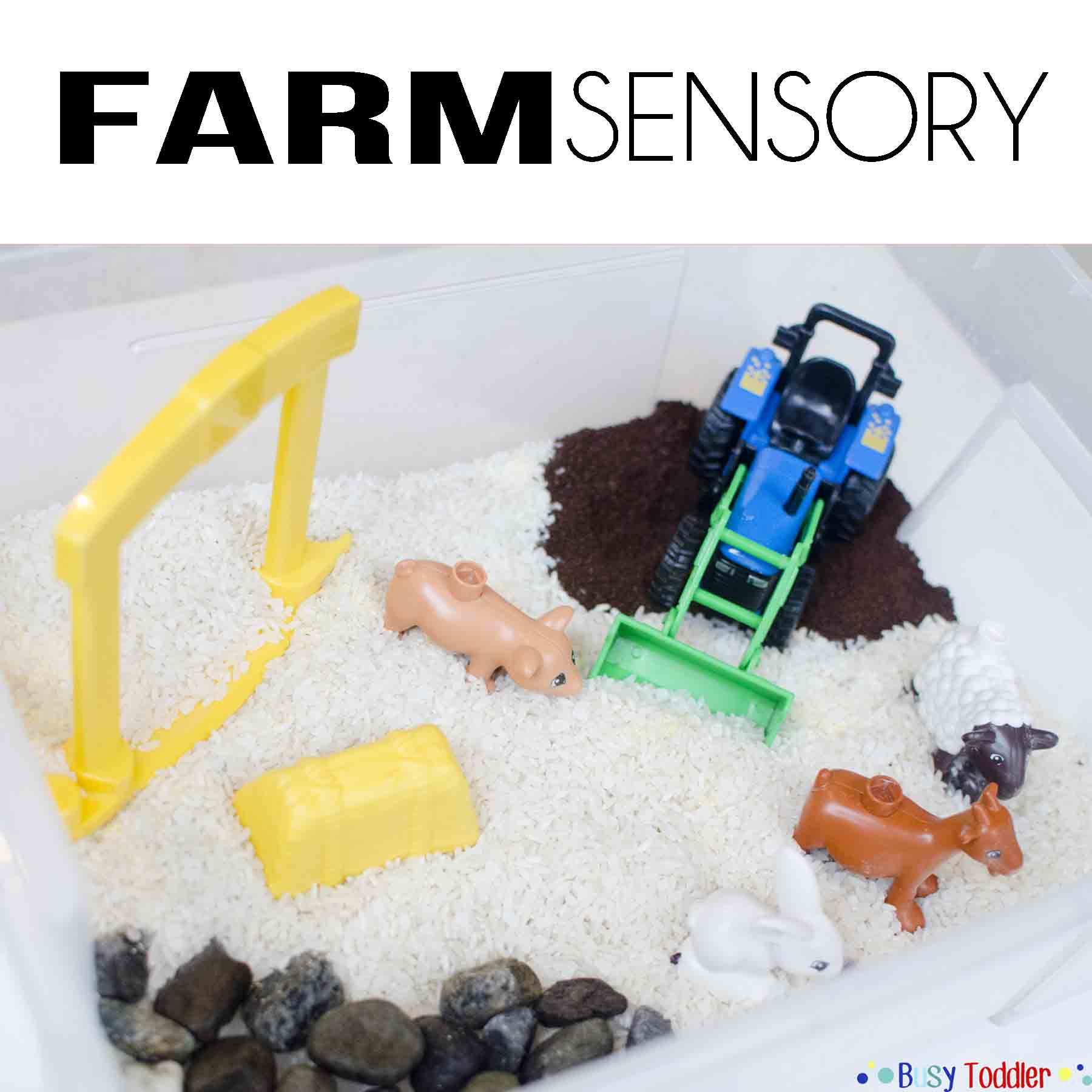 Creating a small world farm sensory scene is a snap.

Small world sensory play seems to be all the rage right now. Maybe it’s always been the rage and I’m just starting to notice. I tend to live under a giant Susie-sized rock…

I wanted to create a small world scene for my toddler, Sam (2.5), but felt a bit intimidated by all the beautifully constructed scenes I saw on Pinterest.

I threw caution into the wind and built a simple small world set up for my boy (and to show you it doesn’t have to be Martha Stewart pretty for it to be a winner – aren’t I such a giver?). 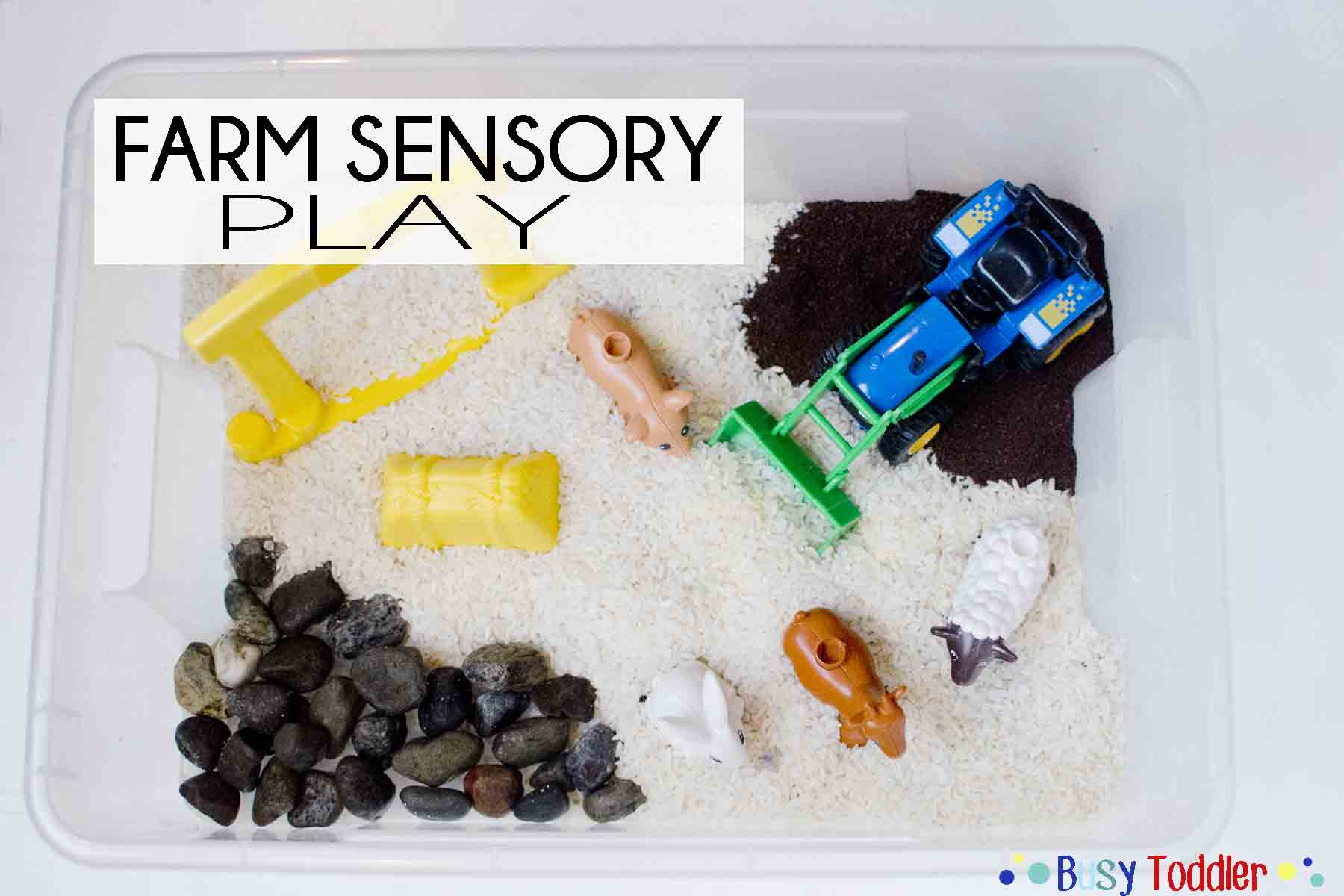 How to create a simple farm sensory bin. 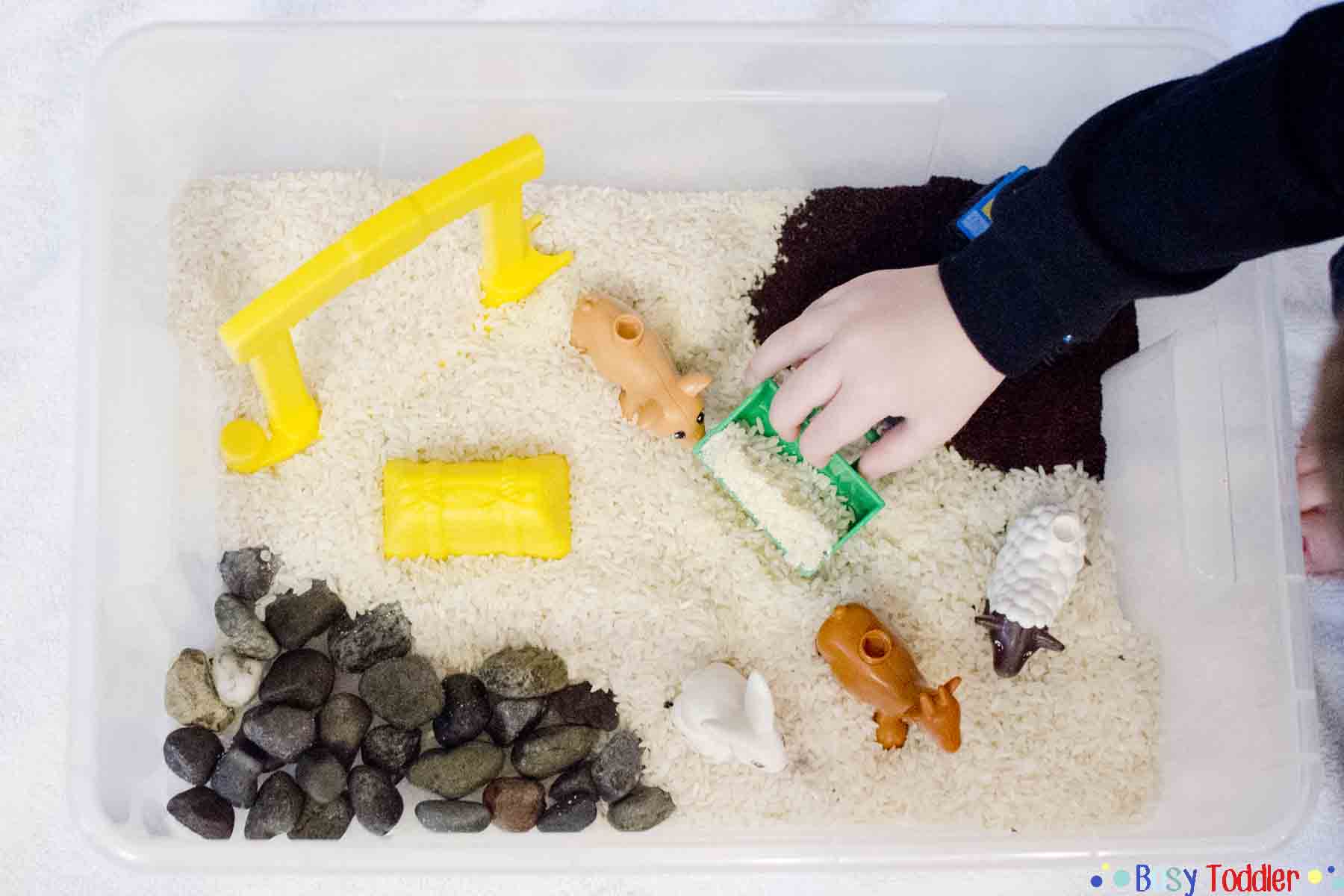 I wanted to keep this simple because I’m not an overly crafty person AND I knew my toddler was just going to destroy this with play. Really, he was going to ooh and aah for about .7 seconds then tear into it like a Christmas present.

And I was right. Point Susie. 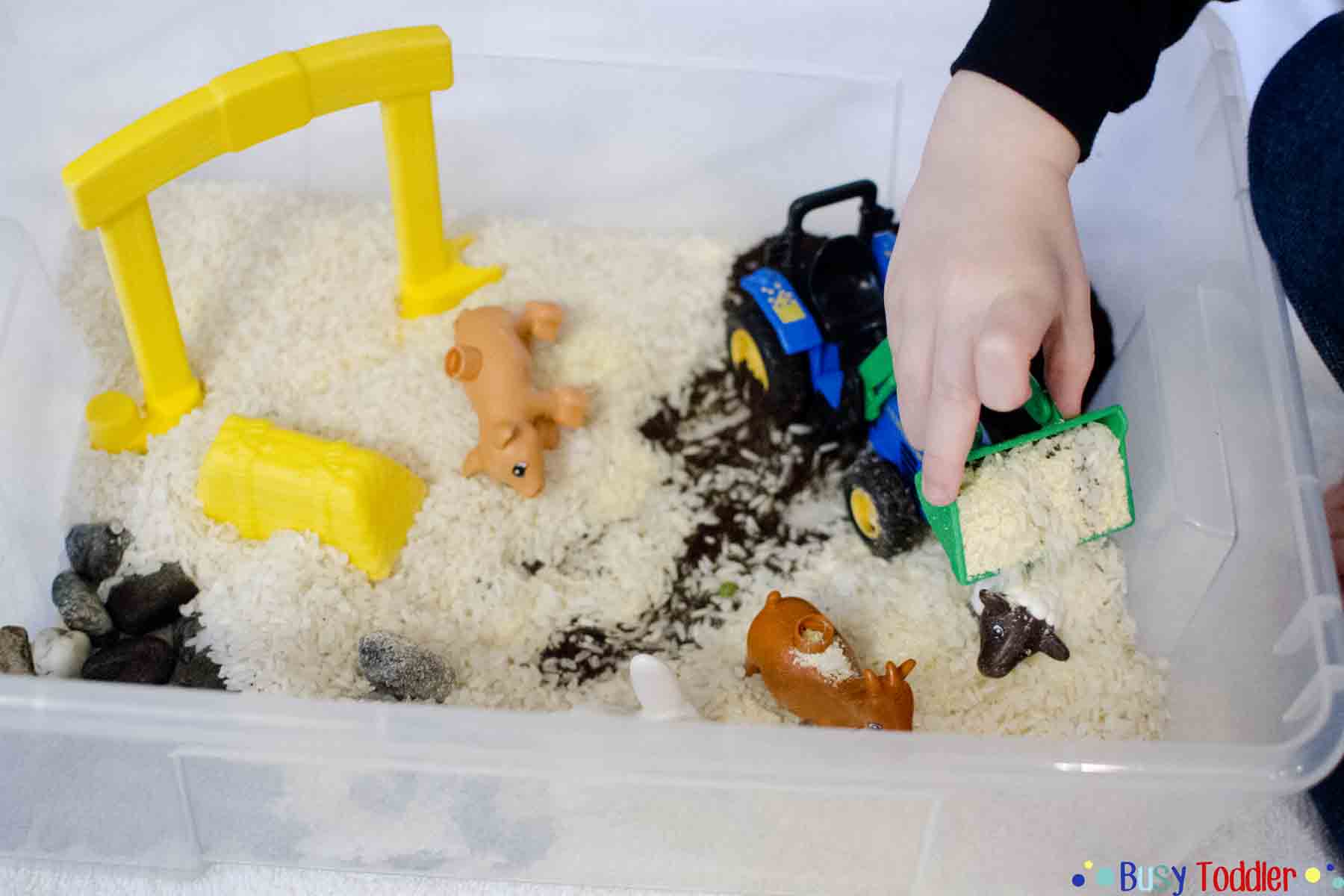 He freaking loved this. I cannot even begin to describe his joy and glee playing with this bin. I kept my eyes on the clock during this independent play activity and it last for a solid 23 minutes. TWENTY THREE MINUTES for a two year old.

He scooped with the digger, put the animals to bed, buried things, and other undetermined toddler imaginary play creations that only he understood.

As someone who isn’t too familiar with “small worlds” I’m totally sold on this idea. This really sparked his imagination and he played with the farm sensory bin in ways I never expected. I was floored.

Even better, when he was “done” playing with the farm aspect, I added some tongs, jars and funnels and this became a makeshift scooping station. He played for ANOTHER twenty minutes. That’s a little more than 40 minutes of independent, concentrating toddler play time with one bin. Praise the Lord.

Have you made a small world scene before? What type of sensory set up could you make for your toddler? 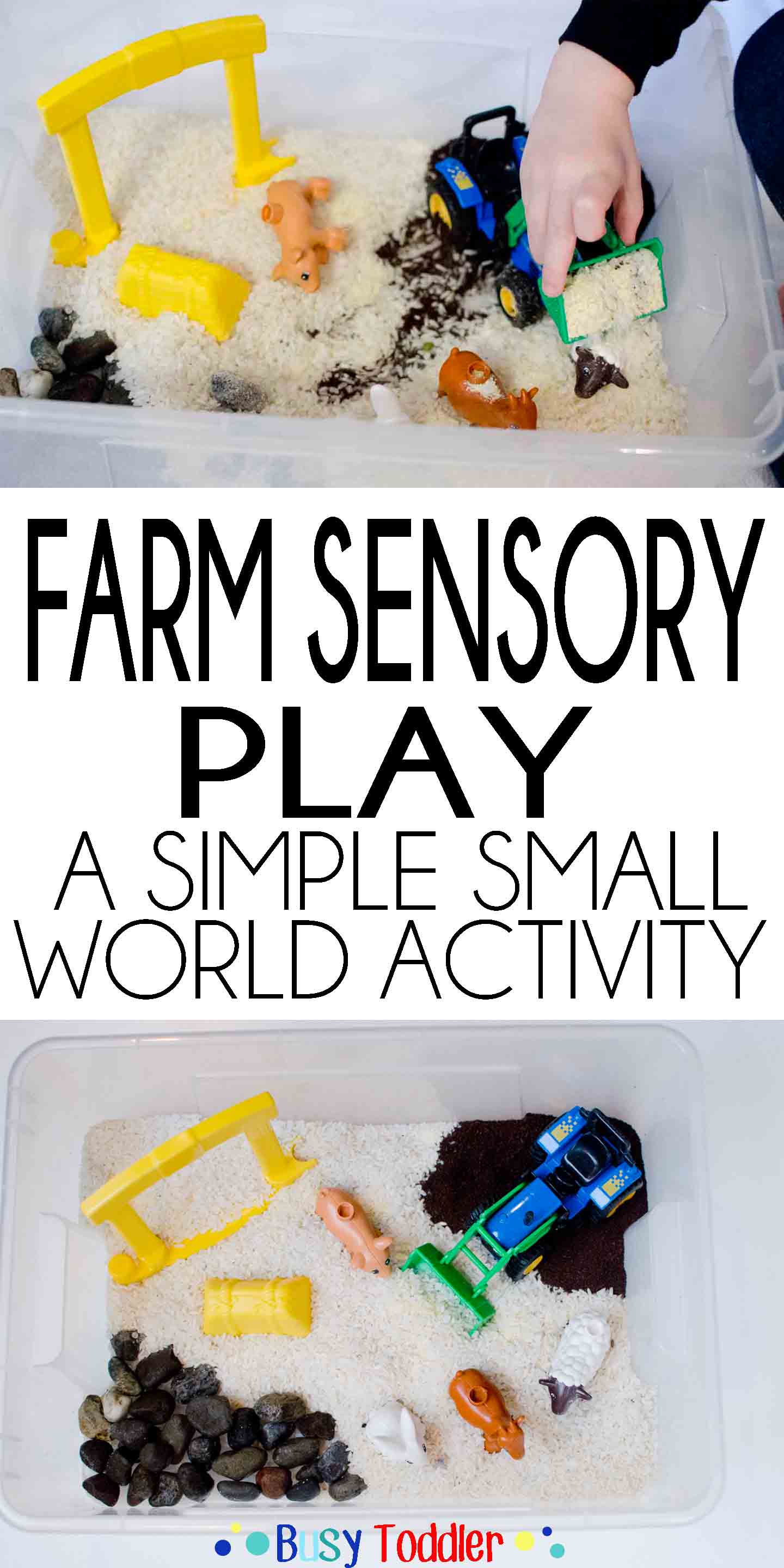