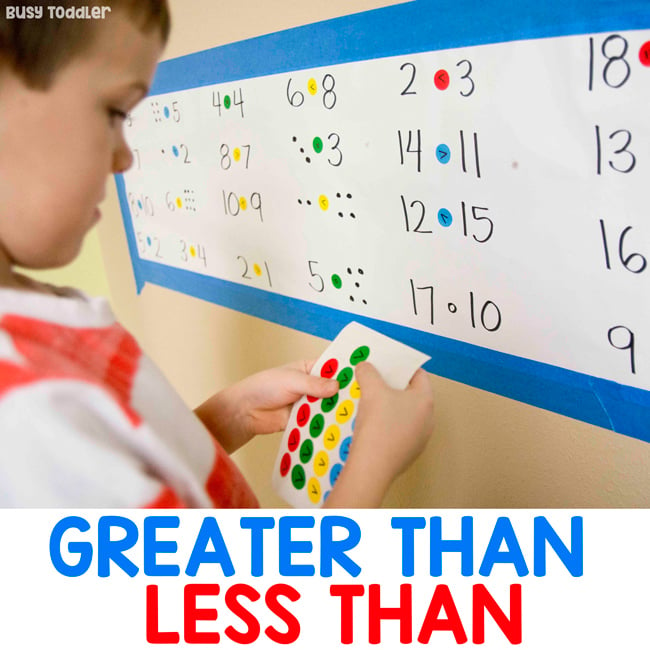 How do you practice greater than less than?

It’s a seemingly simple concept: greater than less than. We remember doing it as kids and talking about which number the “alligator” eats. But how do we get our kids to this point? How do we introduce this concept? How do we teach it without a worksheet?

RELATED: Worksheets are NOT my thing. I’m not a fan and you can read more about my thoughts here. 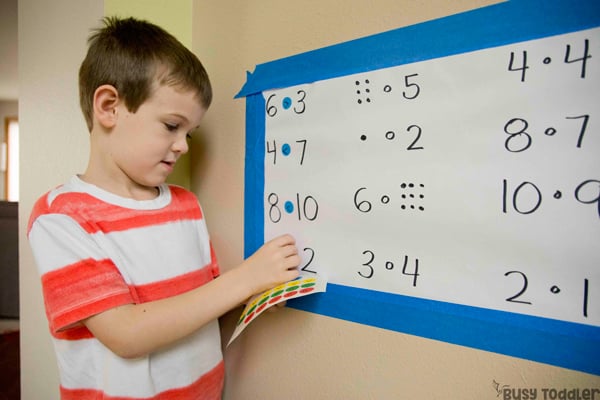 Why greater than less than is a surprisingly complicated skill

But to get a child to this point, there’s a lot of back end work to be done.

First, I’m going to explain all the knowledge my 5.5 year old needed in order to do this activity. 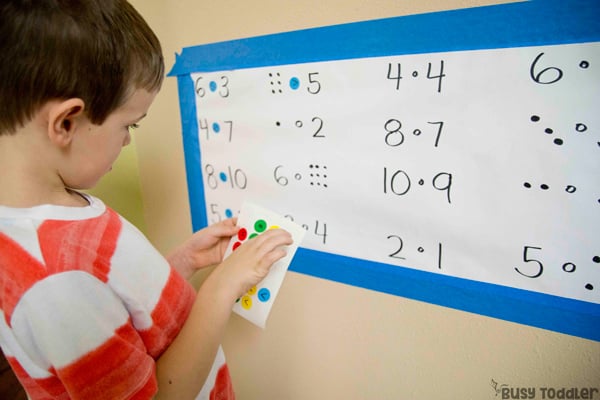 This skill did not happen overnight.

It’s easy to hear our kids counting and think “YES! My kid knows their numbers!” Actually, what your child knows is the first step in a very long, lifetime marathon with numbers.

The first big step in “knowing numbers” is actually understanding the value of number. The idea that the symbol / numeral 5 means five of something. This is HUGE.

RELATED: Want to know how I taught my kids about numbers and value? Learn more about my simple home preschool program. 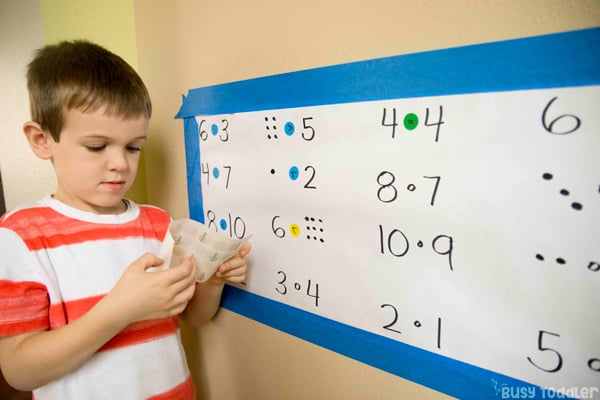 So first, spend a lot of time – months, even years – just talking about the value of a number. Instill in your child that numbers mean something, represent something, and are for more than just memorized counting.

What’s the next step?

Next, your child needs to understand that some numbers are larger or smaller than other numbers.

You do this with physical objects. 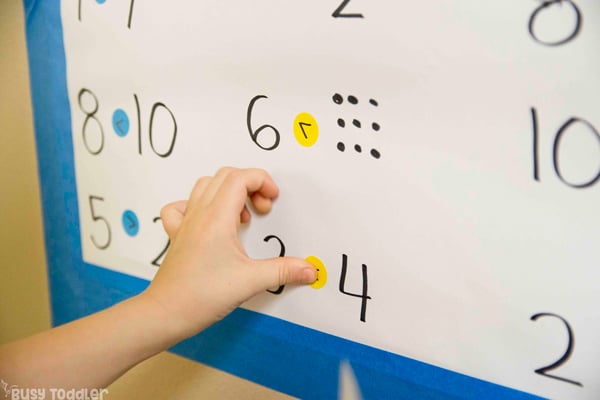 Again, you can spend years working on this skill.

And then – try this game with them.

Remember war? War is a great card game for practicing value and more or less.

Once a child has mastered this game – now they are ready for this activity. 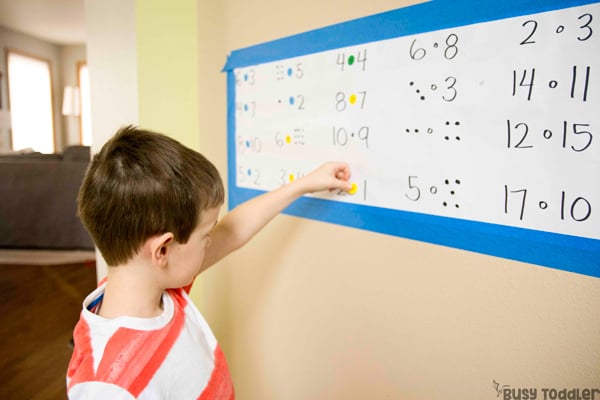 Here’s the buzz on this greater than less than set up.

This activity is a procedural activity meaning the child already knows the concept and has the concept down pat. If your child doesn’t understand the value of numbers yet, PLEASE DON’T TRY THIS ACTIVITY.

There’s no prize for getting the procedure down fastest. Instead, you want your child to be their best at the concept. 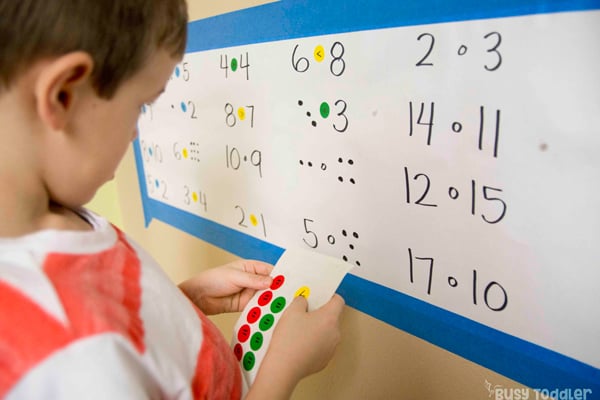 This post contains affiliate links. Busy Toddler is a participant in the Amazon Services LLC Associates Program, an affiliate advertising program. As an Amazon Associate, I earn from qualifying purchases. Read more about these links in my disclosure policy.

Funny enough – these three supplies basically run my life. I can’t get enough of them! Three of the very best supplies to own. 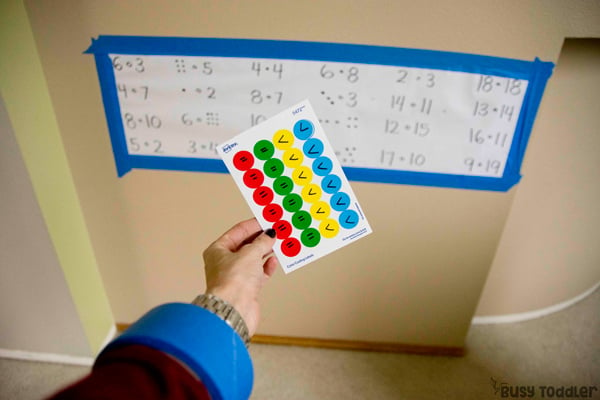 The way to start this activity

I rolled out my paper and put sets of numbers on it. I put a small dot between each number as a place holder for where my son would put the greater than or less than sticker.

Some of the numbers I wrote as pips instead of numbers.

Some of the pairs are equal numbers.

On the sticker sheet – I put the traditional greater than less than symbol, along with some equal signs. 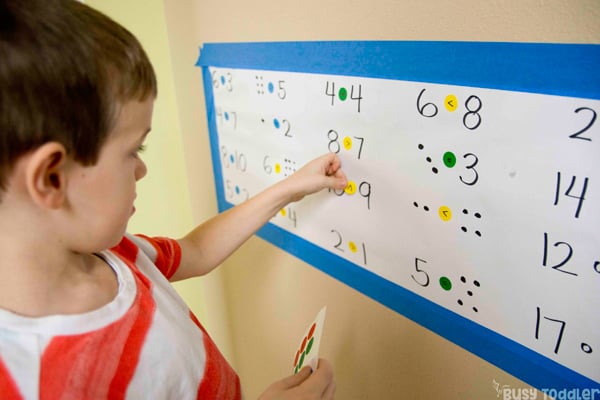 Remember – this is a procedural activity…

My son has the concepts of number values and more or less down. This activity focused on understanding the traditional symbols and procedures for this.

We started with remembering which way the “alligator” mouth should face (he always wants to “eat” the bigger number).

And off he went looking for greater than less than. 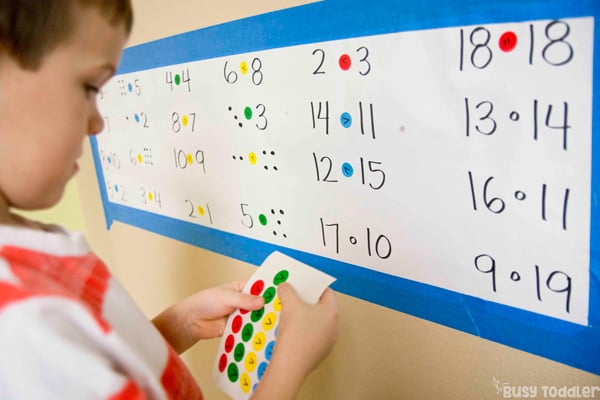 What does it mean to ‘know their numbers’?

The road to number sense is long, winding, and complicated. When our kids first learn to memorize the order of counting, that’s just the first and tiniest piece of this puzzle.

Understanding the value of numbers, that numbers are greater or less than other – that’s a step on this math journey that’s easy to help our kids take.

What do you think of this greater than less than activity? 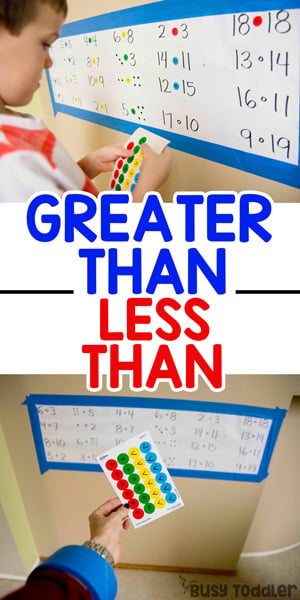 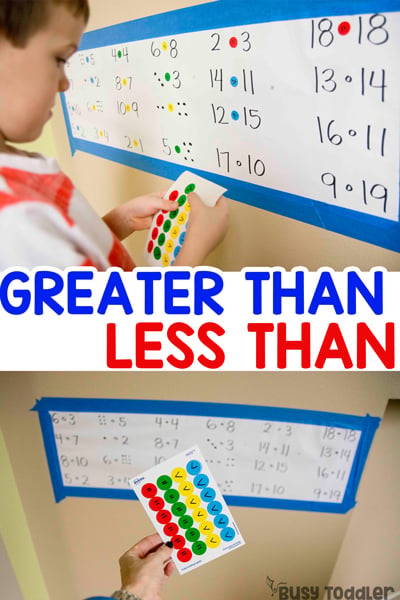